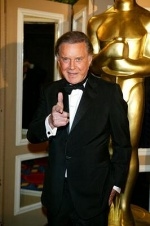 Cliff Robertson—one of America’s foremost dramatic actors—was the only actor to have won the Academy Award (Oscar), the Emmy Award (Best Actor, T.V.), and the Theater World Award (Stage), as well as the Advertising Age Award (Best T.V. Commercial). A true renaissance man, Cliff’s acting, writing, and directing skills have been applauded on T.V., stage, and in over seventy motion pictures.

Cliff was personally chosen by John F. Kennedy to portray the president in the motion picture P.T. 109 —the story of Kennedy’s heroic World War II exploits as a P.T. Boat skipper. It was followed by many award-winning performances in motion pictures, T.V., and Broadway. He supplemented his big screen work with roles on television, including the lead male role in the original prize-winning Days of Wine and Roses on Playhouse 90.

Cliff showed his remarkable versatility as the star of Samuel Fuller’s acclaimed Underworld U.S.A. He gave one of his finest performances in Gore Vidal’s Pulitzer Prize-winning The Best Man, opposite Henry Fonda. He starred in the outstanding 633 Squadron; in the Devil’s Brigade, opposite William Holden; and as a modern-day Mosca, opposite Rex Harrision in Joseph L. Mankiewicz’s updated version of Jonson’s Volpone, The Honey Pot. His brilliant performance as a mentally retarded man in Charly earned him the Academy Award for Best Actor. That critical success was followed by the Emmy Award for Best TV Actor in the drama, The Game.

Returning to films, he then starred in Too Late The Hero opposite Michael Caine, The Great Northfield Minnesota Raid opposite Robert Duval, Three Days of the Condor opposite Robert Redford, and Obsession with Geneviève Bujold.

He also starred in, directed and wrote the acclaimed rodeo drama J.W. Coop, and directed and starred in The Pilot. Other films include Star 80, Escape From L.A., Spiderman 1 and 2, and Stephen King’s Riding the Bullet.  It was in the Spiderman films that he he reached new audiences over the last decade with his portrayal of Spiderman’s Uncle Ben-playing a character who embodied his personal values-“with great power comes great responsibility.’

Cliff’s brave stand against corporate corruption in Hollywood was honored by the late Congressman, Morris Udall, in the Congressional Record.

A native of La Jolla, California, Cliff maintains homes there and Water Mill, Long Island, New York. An obdurate family man, he is close to his two daughters, Stephanie, in Charleston, South Carolina, and Heather in New York City.

Cliff is a licensed commercial pilot. He maintains and flies a stable of classic vintage aircraft, as well as his record-setting glider. He has won many aviation honors, including the Experimental Aircraft Association Award, the Soaring Society of America Award, and the A.O.P.A. William Sharples Award for Rescue Flying in Africa.

An avid sportsman—tennis and skiing—Cliff appears in many charity competitions. Although he maintains a busy schedule of after-dinner speaking engagements between his other activities, Cliff has devoted much time to over fifty national charities.

He died in Stony Brook Medical Center, near his home on Long Island, surrounded by friends and family. He will be greatly missed.